What to Know about Flying Drones After a Natural Disaster 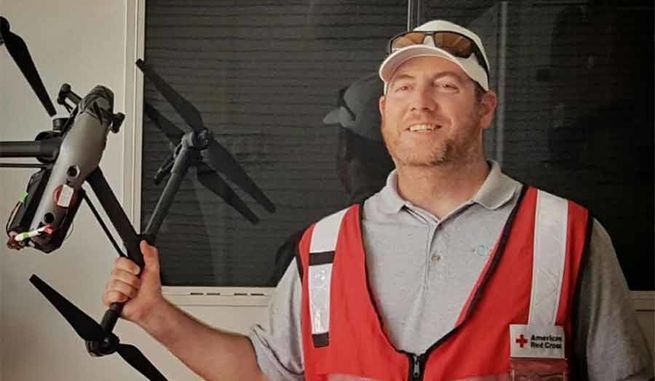 Experts offer important etiquette for operating drones in the wake of Harvey, and before Hurricane Irma hits.

By Jake Lamb
Drones can be used for a variety of search and rescue operations, but anyone who puts a drone in the air during a natural disaster has to be 100 percent sure they can do so safely. Drones can have a much more negative impact during and immediately following a severe storm if they are flown without approval or with safety in mind.

The use of drones after natural disasters is going to explode, especially after Harvey. In the short time operators have had them in the air in Texas they’ve realized how much benefit they could offer Irma operations, Daniel Herbert, a drone operator and Managing Director at Skygear Media, LLC, told Flying.

First and foremost, pilots or operators need to make sure they are being an asset and not a liability to manned air support already in the air. A disaster scene is a confusing and dangerous place for all first responders, and throwing an unauthorized drone in the air makes it that much more dangerous and confusing. In almost all instances, it is best to wait until the critical search and rescue activities have concluded in the area you’re planning on flying into

Only fly in active areas if you have been in contact with the Incident Commander, or one of his subordinates. Also, make sure you are following FAA guidelines and checking TFRs and NOTAMs.

How They Can Help: Real World Examples

There are times in emergency situations where a drone could be indispensable, and quite frankly the only option to save a life.

“One instance comes to mind from a video I saw on the news just last week. There was a group of first responders trying to reach someone trapped in a tree in the middle of raging waters,” DroneU instructor and veteran UAS operator Vic Moss recalled. “There really wasn’t an easy way to get a helicopter in there, and I’m not sure one was even available. In that instance, someone could have easily tied a light line to a drone and flown it over to the guy. They wouldn’t even need a release mechanism on the drone.

“The drone could have been crashed into the tree, or into the water on the other side of the tree,” he continued. “The guy in the tree could have easily grabbed the lead line and pulled the rescue line to him. You have to be willing to sacrifice your drone to save lives. The news story never mentioned if the guy

Another instance involved hospitals in Houston using drones to find a clear path for trucks to get in and deliver supplies.

News footage is another great way to use drones after an emergency. While the need for human interest stories is critical, it is very hard to see the scope of devastation without an aerial view. Drones are providing that footage, and helping raise awareness like never before.

The vast majority of good use of drones will come after the storms have passed, and the SAR activities have been scaled back.

“I know drone owners who have been able to post video on social media showing their neighbors who evacuated if their homes are safe or not. They’ve been able to provide relief to those whose homes are saved, and solace to those whose homes have been flooded,” Moss explained. “That way those homeowners are prepared when they are finally able to go to their homes. The uncertainty has always been the worst part of these disasters, whether it’s floods, hurricanes, or fires. Not knowing is painful.”

Drones are also being used at this very moment to assess damage in order to prioritize where the most good can be done. That information is not only being used by disaster relief agencies, but by governmental agencies to deploy resources. Getting that information out in a timely manner, while using the most cost effective resources possible has been crucial during the immediate aftermath of Harvey.

Small towns that normally don’t have the resources for in depth assessment are finding drone imagery incredibly valuable. They can get that information in minutes, for virtually free, instead of waiting on the limited resources manned aircraft have available to them. They’re getting information to the owners of critical infrastructure and communications equipment. That way they’re not wasting their own resources trying to figure out what needs the most attention.

Insurance companies will also be using drones extensively in the aftermath.